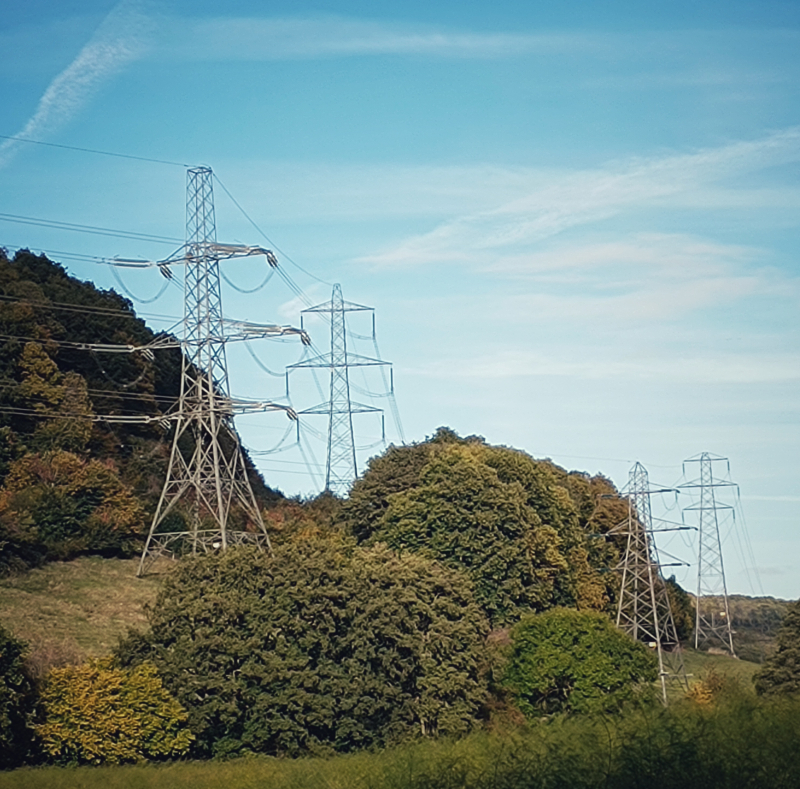 As mid-October came and went, I still hadn't decided on a pylon for the blog when fate intervened and these beauties crossed my path (literally - I was on a short walking holiday with a friend). They can be found close to the village of Coughton just south of Ross-on-Wye. If like me, you are walking the Wye Valley trail in a northerly direction, they are just before the sting in the tail of the Monmouth to Ross leg - a very steep path up to Chase Wood before the final descent. The pylons lower down the hill are on the 132 kV Hereford-Port Ham line and the sub-station at Port Ham would be well worth a visit if only such things were possible. It was finished in 2006 and rather than air insulated switchgear (AIS), it adopted an alternative approach:

based on ABB’s ELK-04 GIS (gas insulated switchgear), the compact design of which meant that the replacement switching station could be housed indoors in a new purpose-built building that occupies less than one fifth of the space used by the previous AIS switching station.

Switchgear is a rabbit hole that I just can't afford to go down - If I did I might not emerge for a few days, so I'll move on to the upslope pylons which are on the National Grid's Walham-Rassau 400 kV line. Regular readers will know that 400 kV is the highest voltage used in the UK and 200 kV and 400 kV lines make up what is known as the super grid - the motorways of electricity transmission in the UK. The Walham-Rassau line is interesting to me for a number of reasons. The first is that if you follow it East beyond Walham (near Gloucester) you reach Didcot power station which is close to where I live. The second is that just West of where I saw the line it goes underground for 2.5 km as it crosses the Wye Valley. Going underground is not a decision taken lightly by National Grid because it costs considerably more than installing overhead lines, but in Areas of Outstanding Natural Beauty, the cost is worthwhile. If that whets your appetite for (lots) more detail, then the Electricity Transmission Costing Study from the Institute for Engineering and Technology (IET) and Parsons Brinkerhoff is well worth adding to your reading list. A quick glance at the Executive Summary is revealing (it's from 2012 so costs will have changed but the ratio of costs for different options is presumably broadly similar):

Phewee! That started with a lovely walk in the Wye Valley and ended up deep in the heart of technical reports about transmission infrastructure. That's the roller coaster ride that is Pylon of the Month!