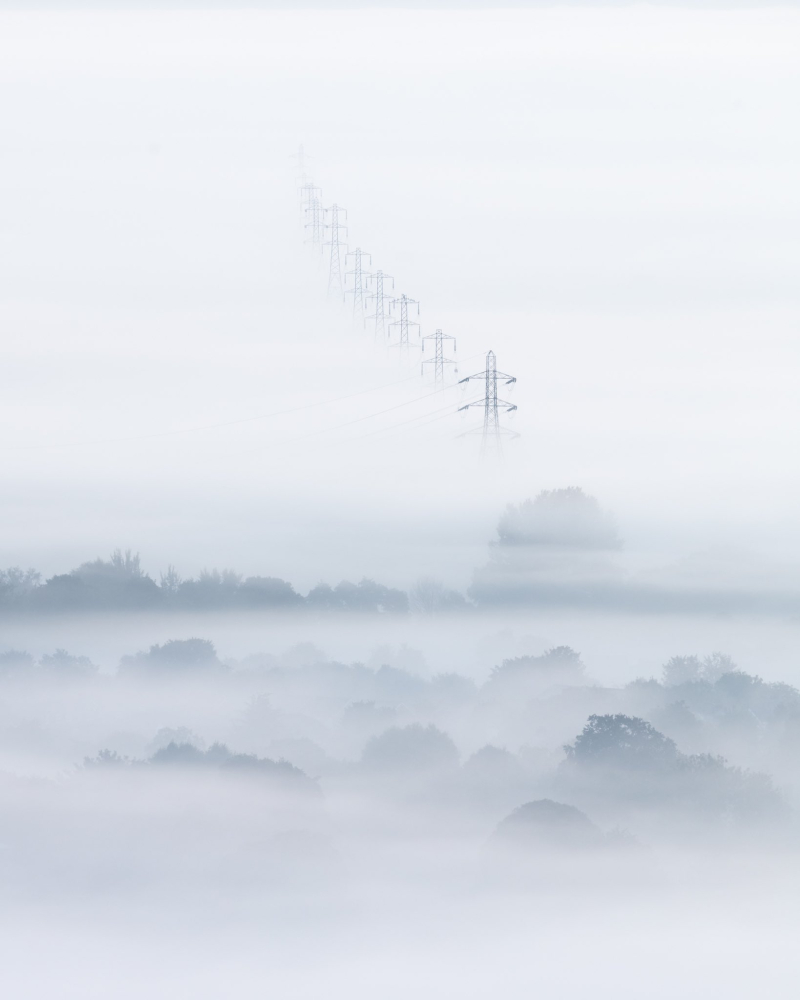 This month's stunning pylon photograph first caught my eye on Twitter where it was posted by @FinnHop. You can also find him on Instagram and via @PhotoBrighton. It's up there with the most stunning photos to have featured on the blog. 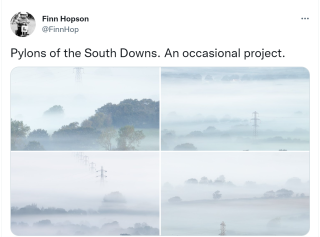 Autumn, the season of mists and mellow fruitfulness seems to have arrived as I write this in the middle of November, so it's a perfect image for the time of year.  Although I've been to Brighton a few times, the South Downs is a National Park that I've never really visited so it's another entry on my ever growing 'Places to Visit' list.

A quick look at the Open Infrastructure Map tells me that the pylons are likely to be linked in some way to Shoreham Power Station a 420MWe combined cycle gas-fired power station in Southwick, West Sussex. I'm a Physics teacher so obviously, I'm familiar with MegaWatts (MW), but the 'e' afterward led me to an SI unit controversy that might be one of the most niche rabbit holes I've disappeared down since starting the blog. Below is an extract from the Wikipedia page on the SI unit of power, the Watt, in particular the sub-section on "Conventions in the electric power industry". This really is one for only the most ardent of electricity geeks.

In the electric power industry, megawatt electrical (MWe refers by convention to the electric power produced by a generator, while megawatt thermal or thermal megawatt (MWt or MWth) refers to thermal power produced by the plant. For example, the Embalse nuclear power plant in Argentina uses a fission reactor to generate 2109 MWt (i.e. heat), which creates steam to drive a turbine, which generates 648 MWe (i.e. electricity). Other SI prefixes are sometimes used, for example gigawatt electrical (GWe). The International Bureau of Weights and Measures, which maintains the SI-standard, states that further information about a quantity should not be attached to the unit symbol but instead to the quantity symbol (i.e., Pthermal = 270 W rather than P = 270 Wth) and so these units are non-SI.

It's raining outside as I finish this post, but I'm hoping for more cold misty days like the one in the photo above. On that note, I'll leave it there for this month. See you in December!

No - I started in 2007. There was already a site called Pylon of the Month but it stopped working so I started my own version!

did you start this way back (1996/7 or so) in the earliest days of the internet? At my office we used to look at a site called something like "Pylons I saw today", and it was pretty similar to yours...