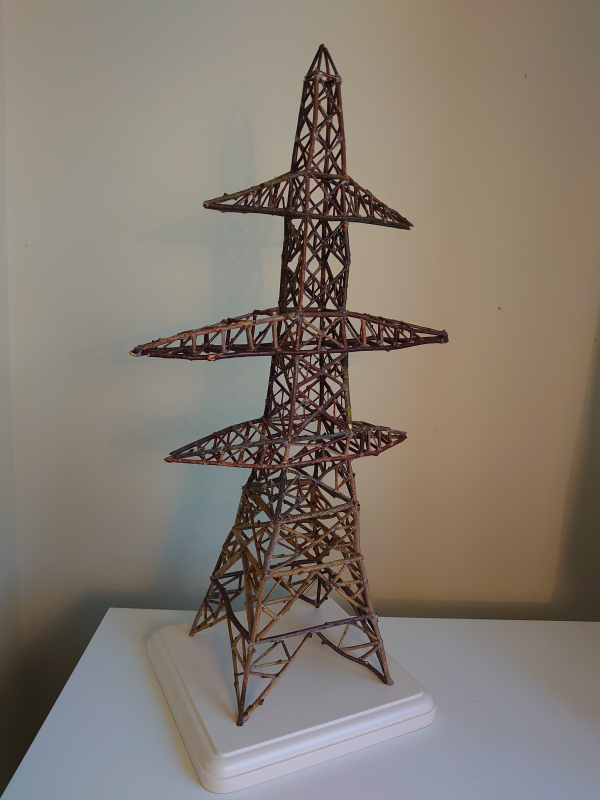 July's pylon of the month is a splendid model made by a pylon fan who had this to say:

The structure of the pylons is a very interesting design to me and I have recently made an “organic pylon” out of twigs and branches which were gathered whilst out walking my dogs......I am not sure if there will be a demand for this as an artistic statement, but it is something I enjoyed building even though it took longer than I initially thought!

The shadow cast by this month's pylon is also a thing of beauty and the level of attention to detail is quite something. 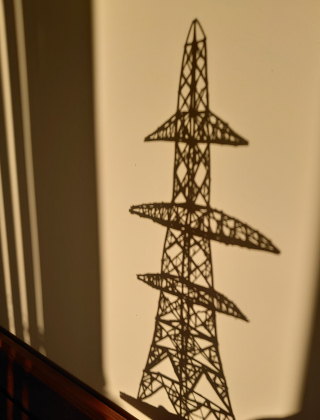 The vast majority of pylons that feature on the blog are real life pylons that can be visited, but over the years there have been a few models or other artistic offerings. There was a pylon tattoo back in October 2012, followed in December 2013 by a Meccano pylon as well as others that have the 'Art' tag attached to the post.

Now for a bit more technical detail about the use of wood in real life rather than in model pylons. Wooden poles in the UK are used for lower voltage lines (33 kV and 11 kV) and you see them alongside paths and near residential areas where the voltage has been stepped down from the main transmission network.  For pictures and details of the different types of power lines, this website is a good and fairly straightforward guide.

That's all for this month. More pylon action here next month or if you need more frequent pylon action in your life then go to Twitter and Instagram @pylonofthemonth. 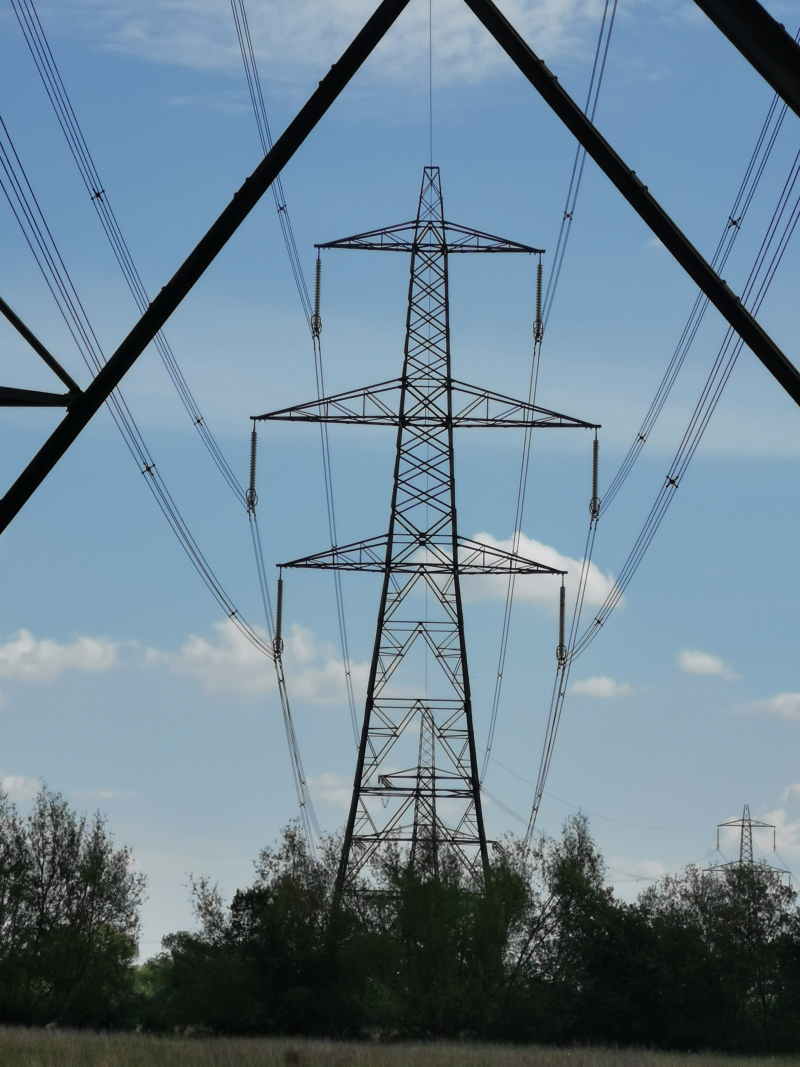 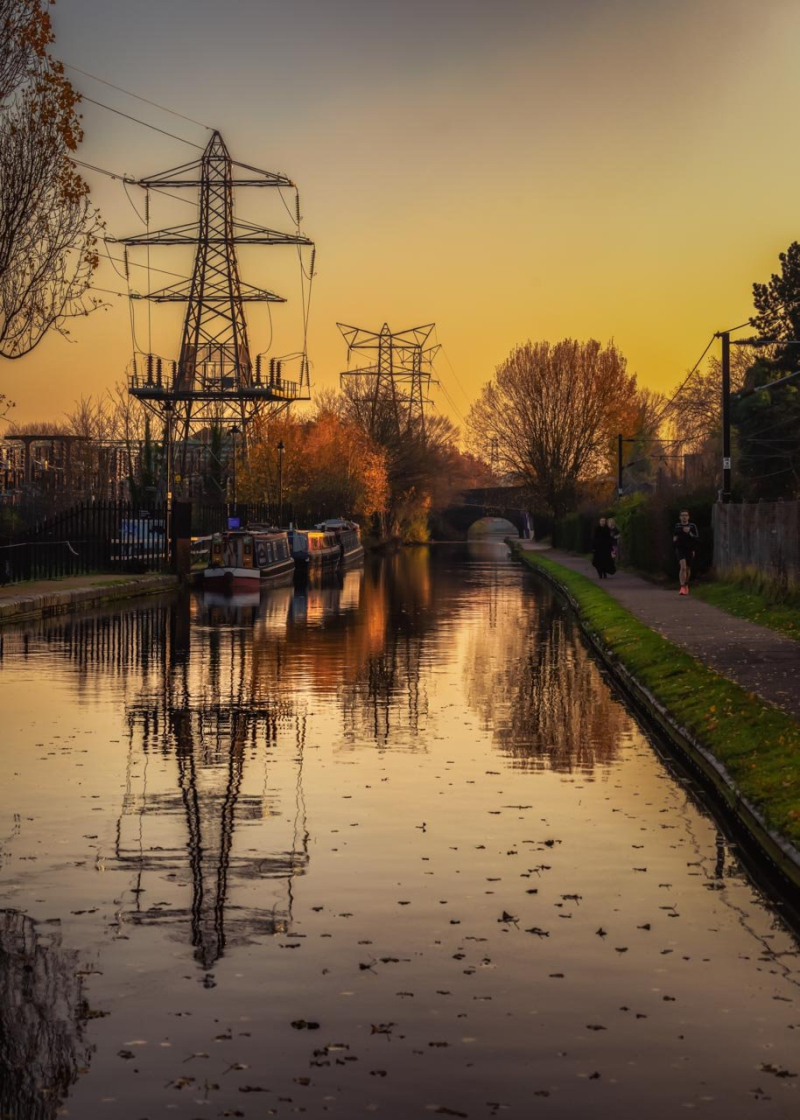 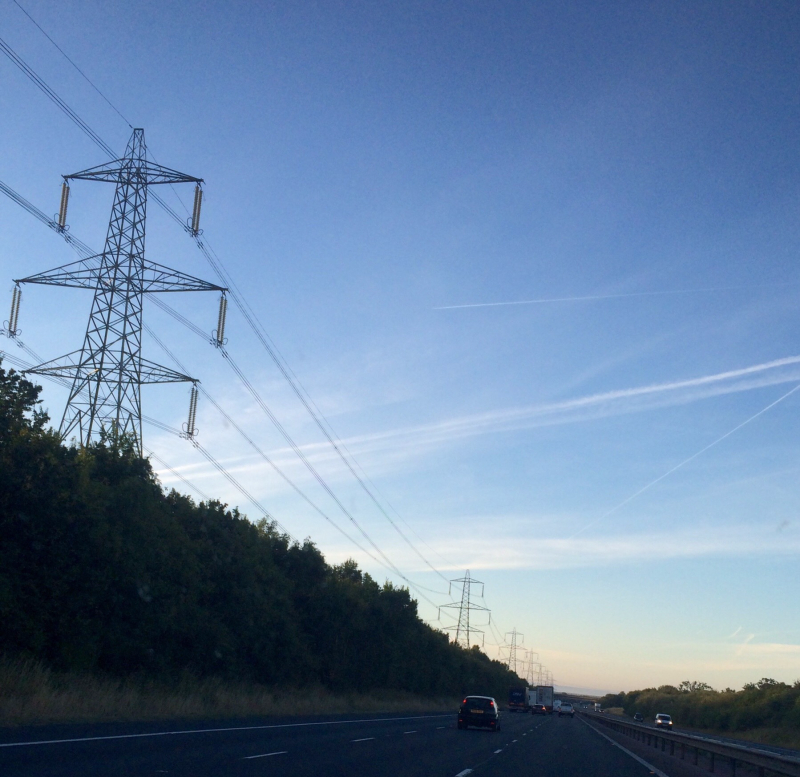 With a new school year starting, getting a pylon up on the blog for September is always tough and with the middle of the month looming, I'd begun to think that it might not happen.  Yesterday, however, I had a conversation with one of the students I teach and they mentioned that on the way to Heathrow fairly recently they had seen a line of pylons by the side of the motorway (so either the M4 or the M25).  Immediately realising that it would be of interest to me they captured the view on their phone and you can see the result above.  I don't have any more information that that, but thank you to the student for ensuring that September is not a pylon free month.

Just to give fans a bit more to look at, I thought that I'd also share a news article about a Stockholm architect's plans to convert two disused pylons into observation towers. 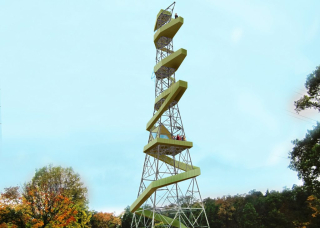 The pylons are in Norra Djurgården national city park in Stockholm.  According to dezeen magazine

"Both we as an office and the client see an industrial historical value in keeping some of the big towers – they are quite amazing structures,"  Berensson  [the architect] told Dezeen.  "They have a great potential to be used for other things than carrying power lines – it's a tower for free!" he said. "There is also of course economic benefit in not having to pay to tear them down."

Remember this if you hear of any plans to tear down disused pylon in the UK!! 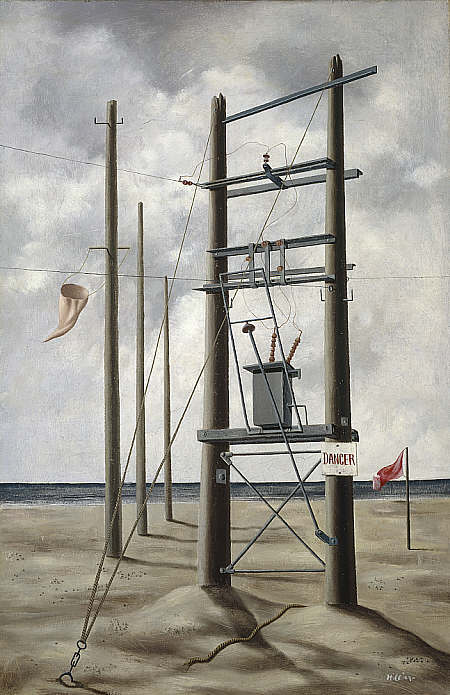 Regular readers of this blog are probably looking at this month's pylon and wondering what is going on, but for the first pylon of 2014 I thought that it would be appropriate to feature the first artist to recognise the significance of the pylon.  The picture is by Tristram Hillier and was painted in 1933.  It is in the collection of the National Gallery of Scotland which has this to say about it:

'Pylons' was exhibited at the first and only exhibition of the modernist 'Unit One' group in London in 1934, where it aroused much interest. It was purchased from the exhibition by Elizabeth Watt, who bequeathed it to the Gallery more than fifty years later. In this painting the three tall pylons carry no wires and their location on the beach is deliberately enigmatic. The attention to detail and relocation of objects from their usual surroundings draw parallels with the work of Dalí and Tanguy. However, unlike those artists, Hillier does not use unlikely objects and improbable landscapes.

I was made aware of the picture when I read my copy of the Jesus College Cambridge annual report in which there was an article by a research fellow, Dr James Purdon about "how the first pylons stimulated the artistic imagination of the nation".  You can read it in the report here and so I won't attempt to summarise the article, but Stephen Spender (who has featured on Pylon of the Month before) and the poet laureate Cecil Day-Lewis both feature.  I was also rather fond of another picture, Landscape with Pylons by Julian Trevelyan, mentioned in the article and shown below (image obtained from here) and the article made connections between surrealism and pylons that certainly gave me food for thought. 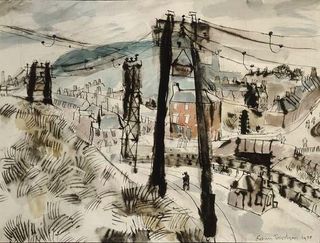 Having raised Pylon of the Month to a new cultural high point, I thought I would briefly mention the fact that pylons are very much in the news at the moment in Ireland.  This recent Irish Examiner article gives a pretty good overview of the latest situation:

Throughout large swathes of Munster and Leinster, opposition has been mobilised against the proposal by Eirgrid to erect 1,300 pylons on a corridor running from Little Island, in Cork, through Wexford to Kildare. The exact route for the ‘Gridlink’ project has yet to be decided, but nobody within an ass’s roar of it is taking any chances................

If you want to follow development then twitter is a good place to start.  Search for the keyword 'pylon'and (in amongst lots of tweets from the USA where pylon refers to American Football and what we in the UK call traffic cones) you can find plenty of (mainly critical) tweets abouts Eirgrid's plans.