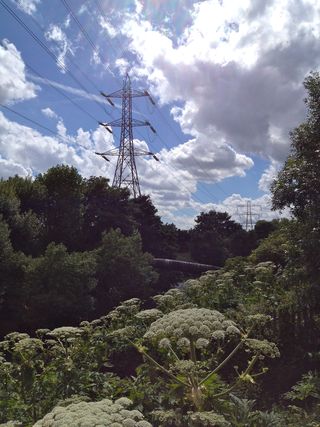 This month, I thought it only appropriate to choose an Olympic pylon in recognition of the London Olympics.  If you are looking at the picture and wondering what makes this an Olympic pylon then you need to know where it is located in order to make the link.  The photo is taken over the River Lea (or Lee) near Clapton in East London, with Hackney marshes to the left and Lea Bridge road to the right.  So it is located in the area of London where the Olympic park is located and it was the regenaration of this area of London that formed such an important part of the bid to host the games.  As with all regeneration projects, some of the past history of the area is lost and this River Lea website has a fascinating history of the area and the following paragraph caught my eye.  If the modern electronics industry began in this area, it seems an even more appropriate choice for Pylon of the Month.

"The Lea Valley was for years the industrial centre of London and home to many inventions. Here was the first monorail (horse-drawn), the driving power behind the motorcycle industry, the great railway works, buses, guns, gunpowder, chemicals, shipbuilding and much more. In the first half of the 20th century this was the UK's 'silicon valley''. The modern electronics revolution began with the invention of the diode by Ambrose Fleming at Ediswan in Ponders End in 1904, and companies including Thorn, MK, Belling, Ferguson (and much later, Amstrad) set up factories here."

The corporate sponshorship of the olympics is a subject of some controversy at the moment, but I will avoid getting involved in that debate and just point out that EDF are the official electricity suppliers to the Olympics and if this makes you keen to know more then you can visit their pavillion in the Olympic park.

So enjoy the Olympics and come back next month when it will be time for my holiday pylon (Greece again this year) and more pylon related news, views and information.